The Co-Op is supporting Beer Men's Shed by helping us to pay for the extra electricity that we'll need to provide a Warm Space through the winter, so that local men can come along, make new friends and join in the work we do. The Co-Op will match every £1 that is donated to Beer Men's Shed between now and 12 January. If you'd like to support us, and see your donation doubled by the Co-Op, please just go to our Crowdfunder page at:
https://www.crowdfunder.co.uk/p/beer-mens-shed-winter-warm-space/backers#start

Thank you to everyone who came along to our Public Opening. Our new and larger workshop is now fully operational and ready to welcome new members who would like to join in.

The opening ribbon was cut by Gayle Chapple representing Beer Parochial Church Council, which has strongly supported the use of St Michael's churchyard as the site for the new Beer Men's Shed workshop. 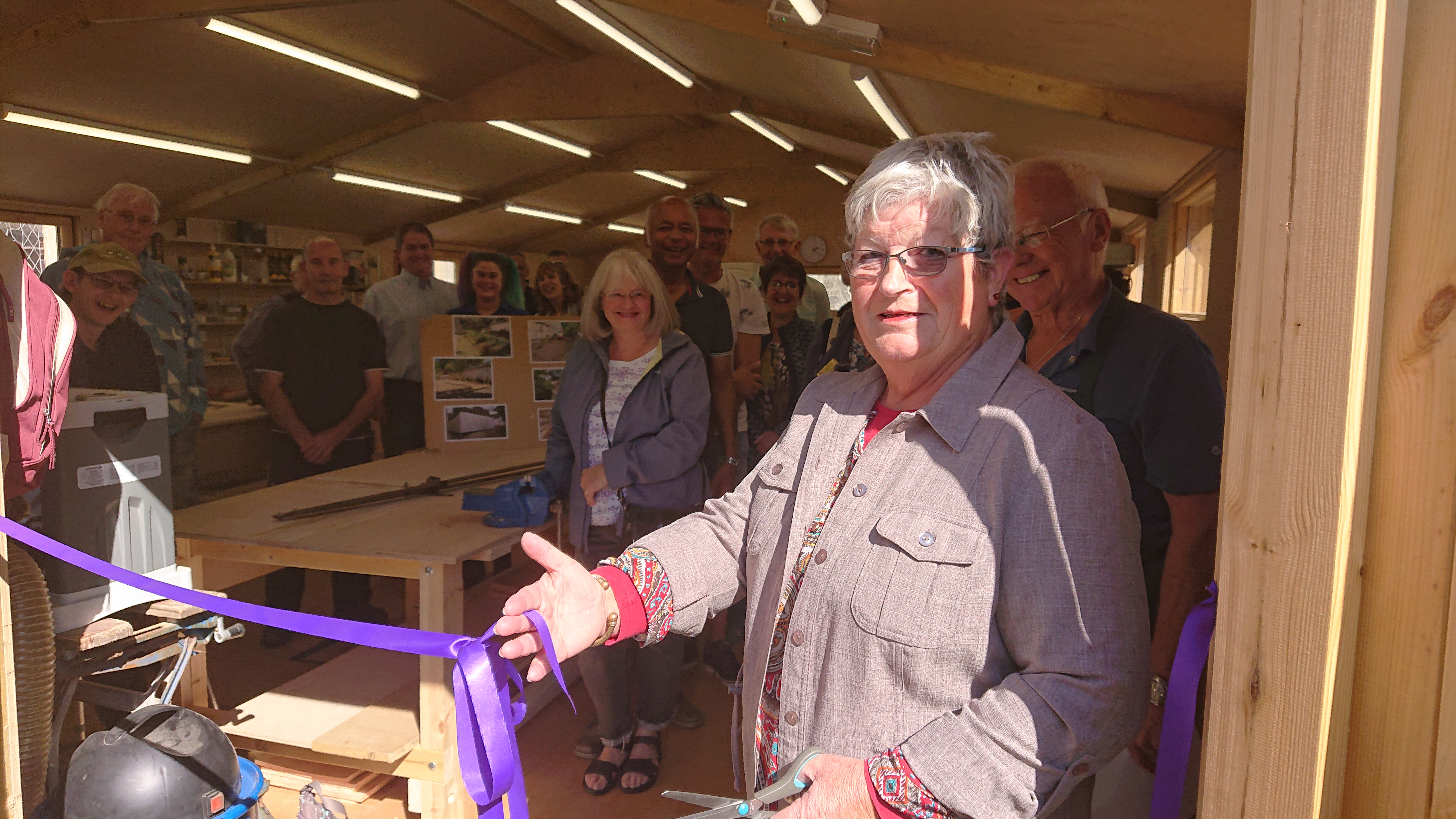 7 April 2022 - Starting work on the second and larger workshop

We set out to raise £20,000 to build a larger workshop.  Meanwhile COVID-19 happened and BREXIT happened and the cost of materials skyrocketed.  But we didn't give up, and we've now raised more than £40,000 to get our new and larger workshop built.  On Saturday 9 April 2022 the work starts to clear and level the site and to have the new workshop built by the end of June 2022.  Never give up!

Beer Men's Shed measures its success by the number of men who take part in its activities.  We now run three workshop sessions each week, on Monday and Thursday afternoons from 2-5pm and on Thursday evenings from 7-9pm, but we need more room so that more men can take part.  In the current COVID pandemic, Government guidelines further limit the number of men allowed to be in our workshop.  All of the men who join in are saying "We need a bigger shed!"

As a result, we've started a new fundraising campaign to build a second and larger workshop.  We've set ourselves a target of raising £20,000 on Crowdfunder by 5 January 2021, so that we can start building our new workshop in April 2021.  It's a high target with a short timescale, so we need all the help that we can get.

We've been operating out of shared garage space for the last six months, and we already have 11 members who have joined.  But today is the "Big Day" that we've also been working towards over those six months - the official public opening of our new workshop right in the centre of Beer Village, equipped with a range of high-quality tools and equipment that are better than any of us could ever dream of having at home.  That means that men can come and join in and know that they can achieve more inside Beer Men's Shed than by just staying at home.

Despite it being the rainiest day of the year so far, people from the village, from the Men's Shed's in Ottery and Exmouth and from Beer Parish Council and East Devon District Council packed the workshop to congratulate us all on a job well done, and to congratulate each other and the local community for making such a great initiative take solid shape in such a short time. 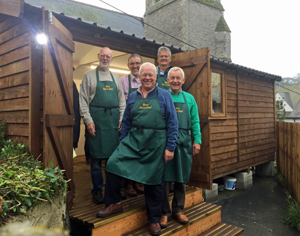 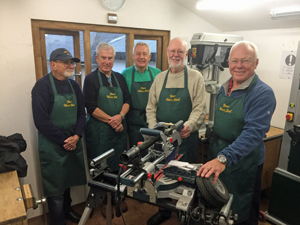 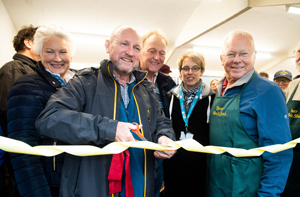 East Devon County Council's Crowdfunder project allows a maximum of 8 weeks to meet your fundraising target - and we did it!  As a result, Devon County Council, Devon & Cornwall Police and East Devon District Council all committed to double the money that we had already raised.  That means that we can now go ahead and get our own shed built and equipped with tools and machinery.

We've now started fund-raising using Crowdfunder, so that any money that we raise gets taken into account by East Devon District Council, and hopefully the council will match whatever we raise. 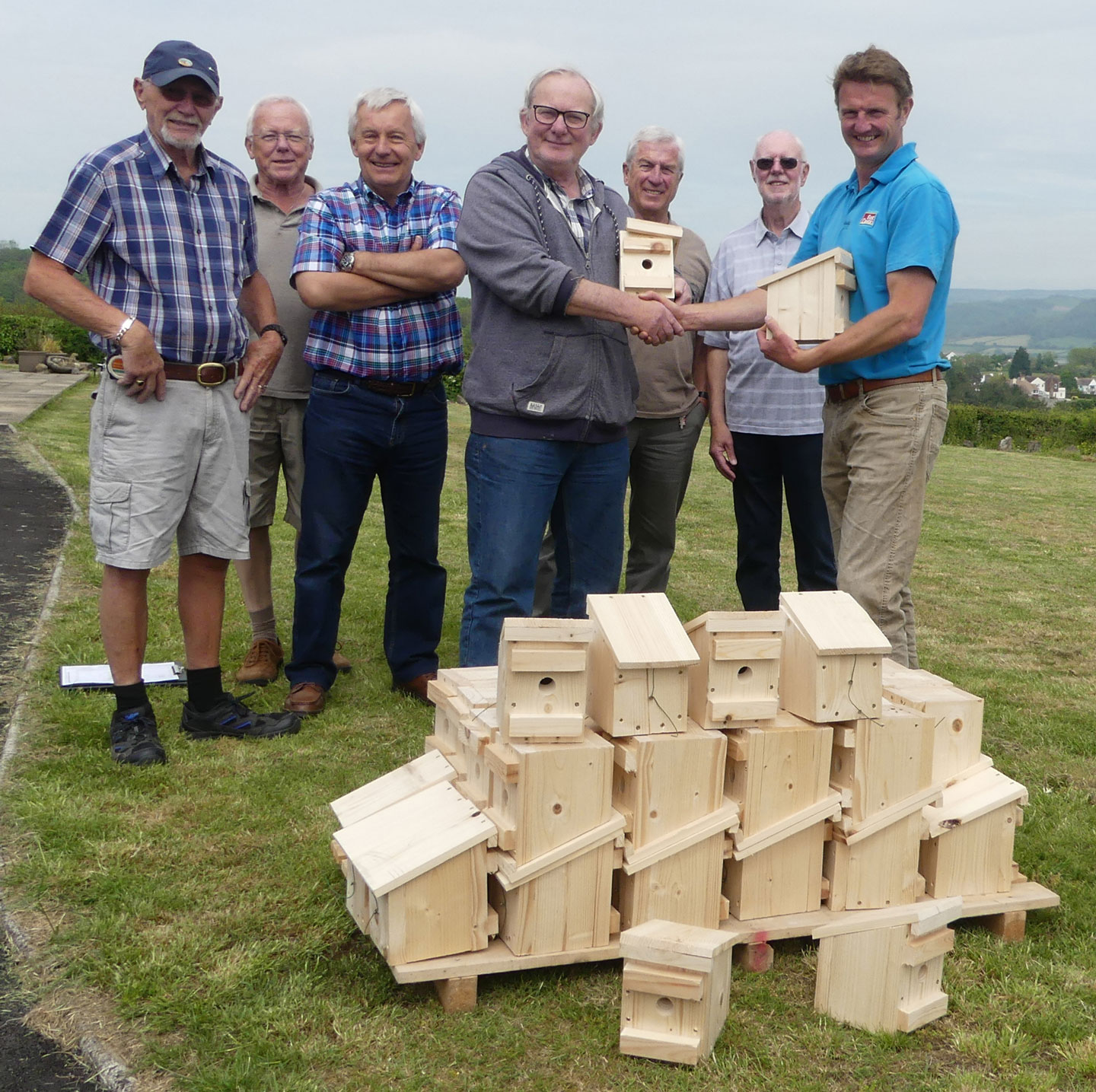 We've now completed our first commission for East Devon District Council (see below) and we have another six commissions in the pipeline, including making a new notice board to replace the old one on Sea Hill in Beer.

We've also received a grant of £300 from Devon County Council, and the East Devon Area of Outstanding Natural Beauty (AONB) has confirmed that it will be donating £1,972 towards the purchase of larger tools and equipment.  "Devon Life" has included a photo of Beer Men's Shed participants at the event for male carers organised by Action East Devon at Seaton Jurassic - see the June 2019 issue, page 183.

The Countryside Team at East Devon District Council, among its other tasks, maintains Nature Reserves across East Devon.  One of these is at Knapp Copse, near Putts Corner on the road from Beer towards Honiton and Ottery St Mary, and which is also, like Beer, in the East Devon Area of Outstanding Natural Beauty (AONB).  The hazel dormouse, which is the only native dormouse species in the UK, has apparently disappeared from half of the UK counties in which it used to be found - but they still live in Knapp Copse.  The Countryside team needs to check the stability of the dormouse population in the nature reserve, but to do that, they have to catch the dormice napping. And to do that, they have to know where the dormice are sleeping.

By mounting nesting boxes around Knapp Copse, the rangers are able to find and count the dormice population, check on their health and ensure that they are doing well.  The Countryside Team has commissioned Beer Men's Shed to make 50 dormouse nesting boxes to support the team's conservation work.  This also supports Beer Men's Shed by providing meaningful and purposeful activities for men in Beer and the surrounding area, benefiting the local community as well as wildlife, the countryside and the environment.

11 March 2019 - Beer Men's Shed is constituted as an association

Men who are living on their own or caring for a partner or family member can get stuck indoors without realising it.  Particularly after they've retired, they can feel that they have lost purpose in their life, as well as many friends.  They can become isolated, lonely and depressed, and this can impact both their physical health and their mental health.

A group of men in Beer have come together to create "Beer Men's Shed" - an association that plans to create a workshop environment that men in the surrounding area can go to in order to meet like-minded men, talk, make things, repair things and have the chance to socialise - even if it's just sitting and having a cup of tea with other men.  Beer Men's Shed was formally constituted today.  It has begun the process of setting up a bank account so that donors can help this initiative with funding, whether they are private individuals, businesses, local authorities or charities.  These funds will be used towards tools and equipment as well as for a shed that the members can share to meet and work in.  And it received its first donation straight away, with a cheque for £150 from the Beer Bag Project.  Beer Men's Shed aims to become active in April 2019.

If you'd like to find out more about how you could join in Beer Men's Shed, please click below to send us an email: 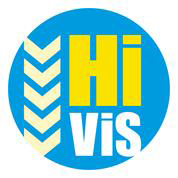 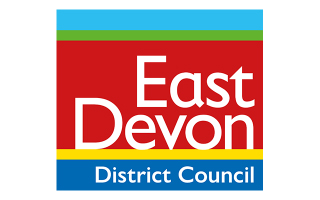 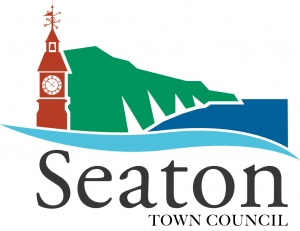 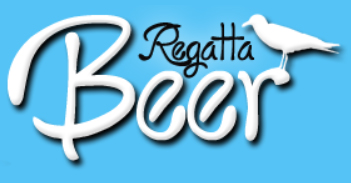